China on Thursday announced that it has brought the deepwater oil rig Haiyang Shiyou-981 back to the waters near Vietnam’s Hoang Sa (Paracel) Islands.

Intelligence report from Vietnam military official said that the China’s Haiyang Shiyou-981 oil rig will explore for oil and natural gas deposits and is now in an area where the exclusive economic zones (EEZ) of Vietnam - China overlap, traversing eastward going south of disputed area of the West Philippine sea, possibly heading towards Recto bank (Reed bank) and near Kagitingan reef where the China’s reclaimed artificial islands, airstrip and military facilities located.

The report also stated that a Chinese hydrographic ship that conducted in the potentially oil-rich Recto bank in the year 2014 (Reed bank) gave a positive oil exploration results.

According to the Military Intel report, the arrival of China’s oil rig in the Philippines EEZ will mainly focus on oil exploration and will conduct oil drilling in the area near Palawan Island in which seismic surveys indicate it is rich in oil and natural gas deposits.

Sources also said that China will soon erect and will install an oil pumping platform.

Right now the workers of Malampaya natural gas field facility in Palawan fear for a harassment from Chinese ships.

There are now raising questions on how the Philippine government will again handle another sovereign threat against this incoming Chinese oil rig. Like what they did in mishandled China’s illegal reclamation in the West Philippine Sea last year that is now nearly 100% finished.

Some said that the Department of Foreign Affairs will again file a useless UN diplomatic protest in which China always ignoring.

Other Filipinos said that the government should also follow the same way Vietnam did last year, vociferously protested China’s oil rig wherein they sent 29 ships attempting to disrupt the oil rig’s placement and operations. The Vietnamese ships met resistance from Chinese ships escorting the rig, and Vietnam stated that its ships were repeatedly rammed and sprayed with water, resulting in 6 people being injured, while China stated that its ships were also rammed and it sprayed water in self-defense. 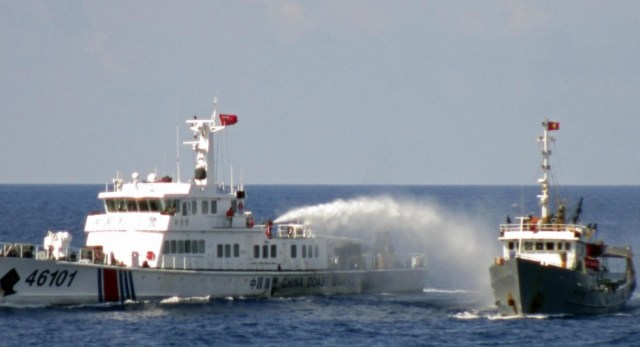 Naval base on Palawan’s Oyster Bay to host US, Japanese and...

Rising Tiger: Philippines stands out as China’s economy slows down