The Mastermind behind the attacks in Paris,Â Abdelhamid Abaaoud is now dead.

French authorities raided a Paris suburb early Wednesday where seven suspected ISIS militants were arrested and two others were killed including one woman who blew herself up with a suicide vest.

French intelligence believed Abaaoud was hiding in Saint-Denis but has recently confirmed he was among the dead.

JUST IN: German Moreno aka Kuya Germs passed away at the age of 82 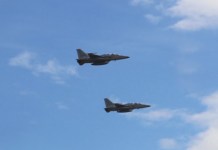 Pres. Duterte is very healthy, has good stamina and level of...