The Philippine Air Force (PAF) will purchase  AIM-9 “Sidewinders” air-to-air missiles from Germany for it’s FA-50 fighter jets.  The expected delivery will be this year, the Department of National Defense (DND) said on Wednesday.

DND spokesman Arsenio Andolong said the AIM-9 “Sidewinders” will be the primary armament for the Air Force’s FA-50 fighter jets.

This additional weaponry with a cost of $20 Million USD will give the Air Force more “fangs” in protecting the country’s airspace, he added.

Andolong said the Notice to Proceed was issued to Diehl Raytheon of Germany on August 31, 2017. While he did not say how many units would be delivered, Andolong said the weapons would be “sufficient for all the country’s FA-50s.”

The AIM-9 Sidewinders to be acquired from Berlin are all brand-new, he added.

This weapon use infrared homing for guidance and tracking its target. The top speed of this missile is three times the speed of sound. 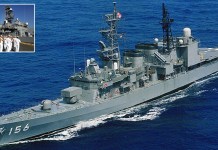 Government debt rises to 56% of GDP

LOOK: 5 Safest Cities in Southeast Asia in 2018 Are in The Philippines

Jordan To Give 2 Cobra Attack Helicopters To The Philippines

President Duterte has Approved the Procurement of Another Squadron of MRF...