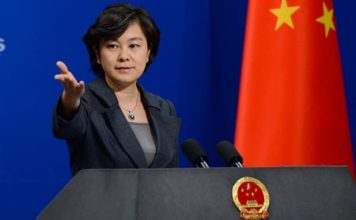 China’s Foreign Ministry expressed serious concern on Friday after the Philippines said it would resume repair and reconstruction works on disputed islands in the South China Sea, saying Manila was infringing on Chinese sovereignty.

The Philippines had halted activities last year over concerns about the effect on an international arbitration complaint filed against China.

Manila called on all countries last October to stop construction work on small islands and reefs in the South China Sea, most of which is claimed by China.

China itself is undertaking massive reclamation works in the area, while Taiwan, Malaysia and Vietnam have also been making improvements to their facilities.

“We are taking the position that we can proceed with the repair and maintenance,” Foreign Affairs Secretary Albert del Rosario told diplomats, military officers and foreign correspondents on Thursday.

He said the works, including repairs to an airstrip, did not violate an informal code of conduct in the South China Sea because they would not alter the status quo in the disputed area. The 2002 code was signed by China and 10 Southeast Asian states in Phnom Penh.

“On the one hand the Philippines makes unreasonable criticism about China’s normal building activities on its own isles, and on the other announces it will resume repairs on an airport, runway and other illegal constructions on China’s Spratly Islands, which it illegally occupies,” Hua said.

“This is not only a series infringement of China’s sovereignty, but it also exposes the Philippines’ hypocrisy,” she told a daily news briefing, calling on the Philippines to withdraw from the islands.

In 2013, Manila filed an arbitration case at The Hague questioning the maritime boundaries claimed by Beijing. Del Rosario said Manila expects a decision in February next year.

Meanwhile, Philippine Department of National Defense secretary Voltaire Gazmin said “repair and maintenance, that’s okay with us. But before we bring in construction materials there, we need to put up a pier to allow the entry of ships. So that will totally change the landscape. That’s against the DOC.”

“If it will be by aircraft, it will be very very expensive and very impractical. So you have to bring in the boat but the boat cannot come in because there is no pier,” Defense chief Gazmin added.

In 2013, Manila filed an arbitration case at The Hague questioning the maritime boundaries claimed by Beijing. Del Rosario said Manila expects a decision in February next year.

Hua repeated that China would not participate in the case.

China claims almost the entire sea, believed to have huge deposits of oil and gas. Brunei, Malaysia, the Philippines, Vietnam and Taiwan also claim the area, where about $5 trillion of seaborne trade pass every year.

Japan To Double F-15J Squadron in Okinawa To Counter China