Philippine President Duterte showed an interested in purchasing Russian helicopters and planes, as well as precision-guided weapons, to fight against terrorist and rebels across the country, he said in an interview with Russian based media.

“We are just fighting a rebellion, just like in Russia. They are just a few numbers but havoc… You need intelligence and precision-guided weapons. We do not have that kind of technology. It is just arms, small arms and rockets that can hit earth with accuracy. And what is very importance with insurgency is helicopters and planes, not jets but propeller-driven — less expensive but more effective in fighting small number of terrorists in ares of conflict,” Duterte said before departing to Russia, May 22.

Duterte said that during his visit to Russia he might try to convince Russian President Putin to supply Philippines with arms.

“I think I would need to convince President Putin to give us the arms. It is not much, actually. It is small land rockets, but that can hit with high precision,” according to Duterte.

Russia has advanced high precision systems and is better in manufacturing of this type of military equipment compared to the United States.

LOOK: President Duterte is leading the poll for TIME 100 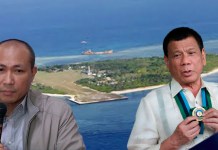