There’s been a lot of speculation about the Korean-made FA-50PH “Fighting Eagle” jet fighter capabilities and potentials.

This video will show you how the FA-50PH fighter jet of the Philippines performs well, doing a surgical air strike mission against the rebel Maute terrorist group in Marawi City.

Filipinos from various places in the country, including media outlet, a defense analyst, and even ordinary ones are doubted with regards to the capabilities of the South Korean-made FA-50PH which is now the main fighter-trainer jet of the Philippine Air Force.

As you can see in the video, the FA-50PH fighter jet is doing well in performing a bombing run, dropping the bomb precisely on the exact stronghold positions of suspected rebel Maute sniper in Marawi.

Now, for people who don’t actually understand that much about the “systems’ in the FA-50. It must be remembered that all weapons, including aircraft, should be part of a “system” since they aren’t meant to operate autonomously, but as part of a much bigger, integrated defense/offense plan.

In an article posted in the Pitz Defense Analysis with regards to the Korean made FA-50PH fighter jet, which was explained by Tan Tian Cai and Trevor Llewellyn Evans, they explained some several viewpoints, their proper analytical aspects based on academic work, assessment on reports, and experience.

According Tan Tian Cai FA-50PH fighter jet is a Lead In Flight Trainer (LIFT) with a secondary combat capability? As the name suggests, it’s designed to train pilots to operate complex equipment before they move on to a front-line fighter type. The FA-50 is equipped with a radar and is capable of combat use by virtue of being armed with an internal cannon and being capable of carrying external stores like bombs and missiles. Officially, that makes it both a fighter and a Trainer as it’s capable of being used for both purposes.

A common argument against calling the FA-50PH a Fighter is that people tend to compare it with other designs and finding it short because it appears that other purpose build Multi-Role Fighters (MRF) are more capable and ‘powerful’. The other common accusation thrown at the FA-50PH is that because it’s ‘just’ a ‘Trainer on steroids’ it can’t compare to a ‘proper’ MRF like, say, the Saab Gripen. The main point is indeed true to an extent. The FA-50PH is not a ‘proper’ MRF. But it IS indeed equipped with the basic equipment that makes it capable of performing the basic job of air defense.

Taking a look at examples from around the world, it’s wrong to say that you strictly need a ‘Proper’ MRF to properly defend one’s airspace. Such armed ‘Trainers on steroids’ have been successfully employed as gap fillers by many top tier air forces such as the RAF.

Armed trainers like the BAE Hawk Mk.208 in RMAF service supplement their fighter fleet and directly contribute to their air defense. Taking a closer look at the specs of the Hawk Mk.208, it’s actually more capable than the now retired Northrop F-5A/B Freedom Fighter’s that once served the PAF by virtue of having a radar which the older F-5A/B’s lacked completely. If the F-5’s had served well despite the lack of onboard radar, imagine what a modern integrated weapons system on the FA-50PH is capable of achieving? Also, consider Thailand’s Aero Vodochody L-39ART, those lack radar like the F-5A/B. Even so, they are capable of the same tasks that the F-5A/B was able to perform. Indeed. In RTAF service, the L-39ART supplements the F-5E Tigris in the same role.

Now. Another common argument against armed trainers is that in a real fight, they won’t stand a chance against a proper MRF opponent. The problem of making such an assumption is that it’s largely academic and not proven in real life. To date, as far as is known, no one has yet pitted an MRF against an armed trainer in real combat. To totally write off an armed trainer as being unable to stand against an MRF is unwise. History has proven that avionics and flight performance is largely academic when put to the test. The Americans learned this lesson the hard way during the Vietnam War when they thought the Mig-17 would be a harmless pushover when faced with their advanced high-performance F-4 Phantom II’s equipped with radar and guided missiles. Both of which the ‘slow’ Mig-17 lacked. Turned out, the Mig-17’s weren’t so docile or useless after all.

So. At the end of the day, the question was, what to call the FA-50PH? The proper answer has always been in its official designation. The maker of the FA-50PH, KAI, called their product a LIFT. So a LIFT it is. But is it that simple? Is the question answered? Surprisingly enough, no. Why not? The real reason why this argument over what to call the FA-50PH has persisted for so long is that it’s largely psychological and yet it has a bearing on the future state of the PAF. Let me break down the points:

1. If people call the FA-50PH a ‘Fighter’, there is a risk that the aircraft may be expected to be able to do things it may not have been capable of doing. This point is largely related to the question of if the FA-50PH is capable of standing up against a ‘proper’ MRF should it have to face one. As was discussed above, it’s a double edge sword. While in theory, it’s up to the task by virtue of its avionics fit and weapons capability, the opposite is also true. What if the naysayers were right after all? That’s the problem.

2. If people just call it a ‘Trainer’, then it negates the purpose of buying the more expensive armed FA-50 version of the aircraft when an unarmed pure trainer version, the T-50, is available at a cheaper price. As was said, the FA-50 is more than ‘just’ a trainer and is capable of combat use provided it’s been properly armed with the proper weapons to do the job.

3. If they call it a ‘Fighter’, there is the risk that some people may think that “Oh. We already have a ‘Fighter’. The FA-50PH is already good enough for our purposes. No need to spend more money to buy a better one”. If that’s the case, bye bye future MRF. Why need to buy a new MRF if the FA-50PH is already good enough? Keep in mind that the purpose of buying the FA-50PH was to prepare and train the staff to operate a proper MRF in the future should the PAF buy any. But of course, there’s the danger that the FA-50PH may become the PAF’s de facto MRF if those in power feel it’s already good enough as one. For this reason, some people may feel it’s better not to mention the FA-50PH’s armed capabilities because they don’t want to put the wrong ideas in people’s minds.

4. If they call it a ‘Trainer’, then some may think it’s useless because ‘It’s just a Trainer that can’t fight and is only good for display only’. Such a view may doom the FA-50 program and hence set up a vicious cycle. You need the experience to be able to handle the types of MRF on the market today which feature equipment the PAF has never encountered before such as glass cockpits and integrated avionics. To learn how to handle an MRF, you need a comparable Trainer to learn on before you move on to the real thing. But if people think the trainer is worthless, they won’t support it. No trainers = no MRF. 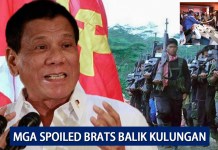